Playing outside with Chick Corea

I'd like to share with you a transcription of an outside lick played by Chick Corea on the song Vulcan Worlds from the album Where Have I Known You Before (Return to Forever). I've always found that playing outside is a difficult topic because even though the concept is simple - just add notes from outside the tonality -, it is hard to make it sound good. There are tons of videos and articles on the web that try to teach you how to best apply the concept of playing outside. Some of them are even quite good, but I believe that the best way to learn it is by figuring out how great improvisers play outside.

So why haven't I just transcribed the outside part of the lick, i.e. the G minor pentatonic part? Because I believe that the art of playing outside lies not only in the choice of the outside notes but also in the way you move outside and back inside again. So let's have a look at these 3 components and how Chick Corea made his choices:
When you check out the lick, also experiment with fingerings and positions because I just chose one possibility that suits my style of playing. In the video below you can hear the original lick with me playing along. Afterwards I also play a slow version, so you can hear and see what's going on. Enjoy! 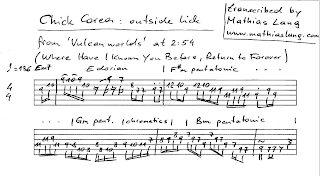